Franco Boni is an award-winning arts and community builder. He served as artistic director of Toronto’s Theatre Centre for 16 years, where he oversaw a $6 million capital campaign to build the centre’s new performance venue. In early 2019, Franco took on the role of artistic and executive director at one of Vancouver’s signature events, the PuSh International Performing Arts Festival. Recently, current theatre students and artistic directors of playground Festival at York, Cat Brown and Jade Silman, caught up with Franco to talk about his career to date. 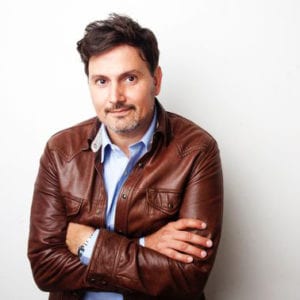 Q: Why did you choose to study at York?
A: I grew up at Jane and Finch. It was the most economical option because university was still relatively expensive and it was easier to live at home and study close by. The theatre program at York came highly recommended by many people. There were a couple of programs that I applied for and York was one of them.

Q: Can you tell us about your experience co-founding the playground Festival as a student at York?
A: For me, it was really important for the writing and directing students to have an outlet to showcase their work in a much more public way and to share with the students. That festival came out of a third year directing class we had with Cynthia Grant, one of the co founders of Nightwood Theatre. She took us to see a lot of shows downtown. She essentially said just make stuff happen and don’t worry about the rules. Playground reflects that there are no rules.

There were some really terrific faculty members and professors that were generous with their time, were really inspiring, and encouraged us to try things. You’ve got to find your own way. The best lesson was that the faculty and the program allowed me to find my own path.

"The best lesson was that
the faculty and the program
allowed me to find my own path."

Q: Can you tell us about your career path from student to artistic and executive director at PuSh?
A: I think there were a couple of key thigs that I did when I left York. One of the companies I was interested in was called Platform 9. I did a project as part of York’s Canadian Theatre Class with the company and I joined the board afterwards as I had a great connection with the co-founders, Robin Fulford and Ken McDougall. Through that class I also got connected to the Playwrights Guild of Canada and was the beneficiary of a grant to work there. Through that I learned about all the playwriters in the country – it was a schooling in a way. I was then introduced to Buddies in Bad Times Theatre.

Q: Tell us about the artists featured at PuSh’s 2020 festival.
A: There’s a beautiful piece called The Fever by an American company called 600 HIGHWAYMEN. There’s about 75 people in the room and you participate in the gentlest way. You don’t know who the actors are. All of a sudden someone starts an action and then another person starts it and then all of a sudden everyone is doing the action. There’s this beautiful moment of how important it is to rely on each other. Everyone has to work together. The piece is really about you in the room.

Q: What kind of advice would you give to students who are looking to pursue a similar career path?
A: I would ask, “why are you doing it?” Constantly question. Try not to be so fearful. The first ten years I just kept making work to figure out what I like. What are the values important to me? Do as much as you can and don’t get too hung up on whether it’s good or not. In the first part of your career it’s a lot of questions and figuring stuff out.

Q: Do you have a favourite spot or thing to do in Vancouver?
A: Not yet – I’m just starting to get to know it. I walk to work most days. As I walk across the Granville Bridge I see the North Shore mountains. The light that hits the mountain as I’m walking is absolutely beautiful.