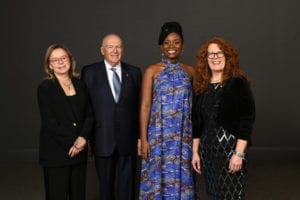 “This year’s Bryden honorees are four more extraordinary examples of York’s commitment to impact in action,” said President and Vice-Chancellor Rhonda L. Lenton. “They have inspired, led and driven change here at home and around the world. They are environmentalists and scientists, innovators, mentors and philanthropists. While making the world a better place, they also have made it a priority to remain engaged and connected to York. They are our greatest ambassadors.” 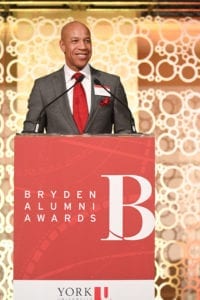 The evening was hosted by Paul Jones (BSc ’80), reporter for TSN and Toronto Raptors’ play-by-play announcer on FAN590 radio, as alumni, students, donors and friends gathered at the elegant Arcadian Court.

The Awards are named after Bruce Bryden (BA ’64), who was an exceptionally committed and influential leader at York. Bryden was a member of the University’s first undergraduate class and he held several prestigious positions, including founding president of the York University Alumni Association and member of the York University Board of Governors. To honour his vision and exemplary leadership, these awards have been named after him.

"I accept this award with deep humility and gratitude as I know this is the result of not my singular effort but that of everyone who has worked and is working with me in self-sacrifice," said Kimberly Badal (BSc ’12), recipient of the One to Watch award. “Being ‘one to watch’ suggests that the thought is that I will do something pivotal. Well, I am going to tell you where we are going. We are going to reach our targets of establishing the first sustainable, high-impact, internationally-recognized cancer research institute for the Caribbean. Cancer is serious business and we do not have time. The patients we serve every day are counting on us. My grandmother who died from this dreadful disease is counting on me.”

As part of the evening’s festivities, the opening song was performed by Knowledge Keeper, Mississaugas of the Credit First Nation, Valarie King. Along with her band, Canadian singer/songwriter and York alumna Amanda Martinez (IMBA ’99) performed the song Gitana for the mid-evening entertainment.

The evening was made possible through the generosity of premier sponsor TD Insurance.

To learn more about the 2019 recipients, their stories and their York experience, visit our website and view photos on our Facebook page.